Snakes are Bugging Virginia in the Springtime

The weather is warming up, and the flowers are emerging. But they aren’t the only ones coming out of hiding in Virginia. In fact, Virginia has plenty of pests that come out to seek the warmer temperatures. Termites, ants, squirrels, birds, clover mites, spiders, and others are coming out of hibernation to stretch their legs. And although they don’t have legs, the most feared is the emerging of the snakes of Virginia.

Snakes Emerge in the Spring

Yes, snakes come out in the spring. Just think about it. The nice warm weather is the perfect time for filling back up with food and the mating season. According to Michael J. Clifford, president of the Virginia Herpetology Society and the Daily Press, there are two times of the year when people are likely to see snakes,

“The first period comes in May and early June, ‘because they’ve emerged from hibernation, there’s warm weather, they’re actively feeding, (and it is) mating season for lots of the species.’ The second period comes in the fall, as baby snakes begin to show up, the result of matings that took place during the spring and summer.”

And yes, we are in the spring in Virginia, so you may have already seen a few. So, let’s dive into the types of snakes in Virginia.

Virginia has upwards of 30 different varieties of snakes. And they can grow from a mere few inches to a lofty eight feet long. But most of them are of no harm. In fact, many can be good to have in your yard since May is also mice breeding season. Snakes will help to eliminate an infestation. But if you have a venomous snake in the yard, that is a different story. 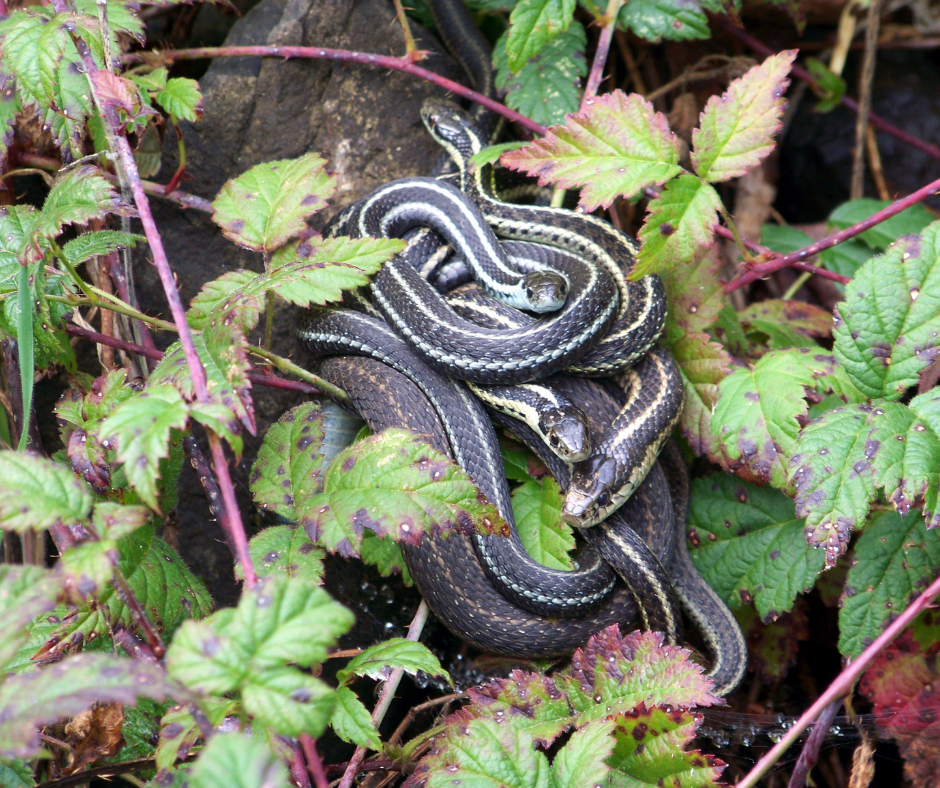 The state of Virginia is believed to have only four venomous snakes in the wild. The most obvious way to identify a venomous snake is by three distinct features.

However, if you come that close to a venomous snake, chances are it is too late. Two additional identifying characteristics of many venomous types are the stocky bodies and the solid color. Here are the four in Virginia.

The identifying hourglass shape markings are the best way to tell if you are looking at a copperhead snake. Not to mention the copper color. Where they are indeed venomous, their bite is mild and seldom fatal. They are medium-sized snakes, averaging 2 to 3 feet in length.

As a member of the pit viper family, these venomous snakes grow to be 36 to 60 inches long. They are a yellowish-brown color with irregular zig-zag patterns wrapped around them in dark brown or black. And they have impressive fangs that hold a great deal of venom. Although, if they are going to strike, they usually allow plenty of time for you to back up slowly as they rattle and hiss.

Cottonmouth snakes are water snakes, and they too are venomous. These heavy snakes grow to 30 – 48 inches in length. A dark band with light edges covers the eyes and is perhaps the easiest way to identify a cottonmouth snake. Most of these venomous snakes have brown bodies with dark brown crossbands, spots, and speckles as well. As they mature, many turn a solid black.

These pit viper snakes are the same in pattern as the timber rattlesnake, but they appear slightly more on the gray side. And they can grow 4 to 6 feet in length. Their fangs carry the venom they use to paralyze their prey.

There are several non-venomous snakes in Virginia, and they are actually good to have slithering around in your yard. Just know, several snake species shake their tails when cornered, and not all of them are venomous. Here are a few of the varieties homeowners should welcome into their yards.

Measuring three to five feet in length, these rat snakes are the ones you want around. They are harmless to humans, and they eat the mice and rats that may try to enter your home. They are very common.

Garter snakes are small to medium-sized, and you can find them in water and on land. They will eat anything they can, including earthworms, slugs, lizards, frogs, and small rodents.

These snakes are often mistaken for cottonmouths. They can be varying shades of gray, tan, or brown with dark bands. When in danger, they will flatten their bodies and bite, but the strike is not venomous. The average length is 3.5 feet.

Kingsnakes are medium-sized snakes kill by constricting their prey. Their glossy scales are red, black, and yellow like a coral snake. However, the “red meets black” means it is a kingsnake and is nonvenomous. If you see one with “red meets yellow,” well, you know what they say? “red meets yellow, kill a fellow.”

The upturned snout is the telltale sign of a hognose snake- used for digging in sandy soil. Their color and pattern vary widely with a sandy-colored base and black and white markings. Like the cobra, the hognose will raise and flatten its head and hiss when threatened. And they eat lizards and rodents.

Another constrictor, these snakes are 36 to 60 inches and are all shiny black with a brownish nose. With their head lightly raised, they race swiftly through the grasses to search for small prey. 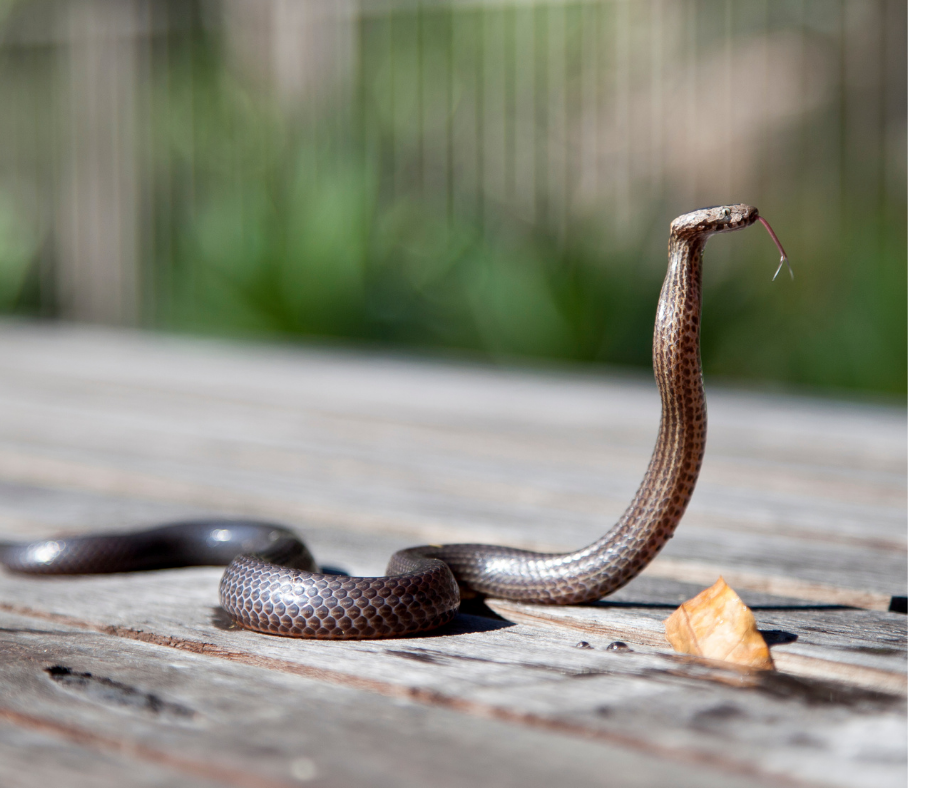 The answer is, No. It is illegal to kill a snake in Virginia. However, if it poses a significant danger to a person or livestock, you can defend your home and animals. That said, the exception is if the snake is on the endangered list. In those cases, you cannot kill them under any circumstance. One such snake is the canebrake rattler.

If you encounter a snake in your yard or home, here is what you should and should not do.

Preventing Snakes in Your Yard

The best way to prevent snakes from entering your yard in the first place is to keep snake food off the property. Snake food includes many types of insects, frogs, lizards, and rodents. So, if you know you have a rodent problem, have a pest solution expert take care of that before you expect anyone to rid your property of snakes.

Now, there are a few other things you can do to keep them out of your home.

James River Can Help You Keep Snakes Out

James River Pest Solutions want to help homeowners keep snakes out of their homes and yards by removing the main attractor, rodents. When we come out to inspect your home, our technicians will evaluate the level of need you have, locate pest entry points, and begin the process of protecting your home.

Where there are pests, there are sure to be snakes in Virginia. So, don’t be caught with a pest issue and subsequent snake problem. Remove the food source, remove the snakes.

What Termites are in Virginia?

What Termites are in Virginia? Did you know that one yard can contain thousands of termites? And what’s worse is that they live underground in […]

The Cicadas Are Back

Imagine for a minute, if you will. After 17 years under the ground, these creatures crawl out from the land pushing the dirt and tree […]

Snakes are Bugging Virginia in the Springtime The weather is warming up, and the flowers are emerging. But they aren’t the only ones coming out […]